Having been aware of the pomegranate as an important symbol in Spanish history for years, it´s always been a latent presence in my spiels of Granada´s past. The pomegranate is visible all over the city, replicated in wood, metal, stone and fabric and it has been drawn and painted countless times. This is no surprise as Granada in Spanish means pomegranate. It is the city’s name. The Catholic Monarchs took the fruit as a symbol of their final victory over the Moors of Al-Andalus and it remains part of the Spanish flag even today.

In 1932, Mexican composer Agustín Lara wrote a song about Granada, which has worked its way into international repertoire due to its rousing melody and passionate Spanish lyrics. Frank Sinatra, Katherine Jenkins, Bing Crosby and Plácido Domingo have all sung it, to name but a few.

This year, however, I have found myself pondering its deeper symbolism. I´ve been eating pomegranate seeds daily and reading books about them, as they´ve become a permanent fixture in my home. Not only are they a power food (the seeds contain more antioxidant properties than green tea and cranberries) but they taste damn good and they bring an extra pizazz to a plethora of dishes, salads and desserts. I love them with mango and I love them with cream of cauliflower soup. They are amazing with certain cheeses and gorgeous in Greek yogurt. A favourite tipple is a pomegranate martini! But let´s get back to the beginning.

In Greek Mythology, this ancient symbol carries the weight of life and re-birth. Its origins hark back to Iran and Afghanistan and it remains as the symbol of Armenia signifying fertility, abundance and marriage. It is mentioned in Holy Scriptures on several occasions. Some think that even the “Forbidden Fruit” of the creation story might have been a pomegranate. Apparently, and I say apparently as I´ve never actually tried and tested this theory (if anybody feels inclined to take up the challenge, please let me know), there are 163 seeds in every pomegranate; a sacred number in the Jewish faith, as there are 163 commandments in the Torah. 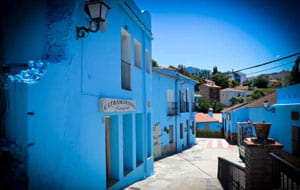 The pomegranate appears in the Song of Solomon as a highly desirable symbol, ripe with sexual overtones; and there is no denying its implicit sexual imagery with all the connotations one could draw from its ripping flesh, sweet juices and bulging seeds.

So, as you can see, there is a lot to ponder. And as my musings this month have been taking me through the myriad of historical references, the pomegranate has come to take pride of place in my daily meditations. It´s a memory fruit, it harks back to days gone by, to civilisations past and within its relatively simple outer shell, it holds its real treasures within, just like the palaces of the Alhambra or the fragrant beauty of the Andalucian patio. Last weekend I took a walk along a lesser-trodden river in the heart of Andalucia, in a sublime rural setting bursting with natural beauty and there, behind a dry stonewall stood a lonely Pomegranate tree. Obviously untended for years, its spindly branches reached over the wall almost in desperation, that someone might take of its fruit. But alas, I had arrived too late. Each and every individual fruit has already passed its optimum time and their flesh had split and opened to spill the seeds onto the floor below. I cast my eye over a thousand seeds, resting on the ground: some of them still catching the early morning light in their transparent, red flesh- a thousand and one tears.

If all this talk of pomegranates has you salivating go here for some of our favourite pomegranate recipes.