Speaking in the 2016 documentary Priorat, winemaker Rene Barbier says: “The best wine is the one with a story to tell”. And few wines have a story as fascinating as those produced in the world famous region of Priorat, in Catalonia. Winemaking against all odds

The region of Priorat stretches over nearly 50,000 acres in the Catalonian province of Tarragona.  The landscape is arrestingly beautiful: folds of mist-swathed land staggered in ledges along the hillside, the surrounding mountains forming jagged shapes against a backdrop of endless sky.

But despite its picturesque aesthetics, this is tough country. Many winemaking experts have expressed incredulity, upon surveying the Priorat terrain, that any wine could ever be grown here at all.

Within the industry, Priorat winemaking practices are referred to as “heroic”, owing to the numerous natural challenges that render successful farming here almost impossible. Sunset in the mountain ranges of Priorat

The vineyards themselves are angled on the slopes, only accessible via narrow, curving roads gripping the hillside.  The soil is fiercely inhospitable, a mixture of slate and mica, known by locals as llicorella, which is largely resistant to any crops apart from the more tenacious olive and fruit trees.

The high acidity levels of the earth are teamed with unforgivingly dry topsoil, which means plants have to dig roots down into subterranean depths to find water.

Due to the awkward geographical composition of this mountainous region, most harvesting must be done manually, aided only by a mule and trap, and planting is a similarly painstaking and arduous process. The terrain of the Priorat region makes winemaking challenging

Wine in the blood

Despite the complexity of the terrain, Priorat is a region with a long history of winemaking.  The area first prospered from its vineyards in the middle ages, when the Scala Deli monastery dominated the land and began training its monks in the art of viticulture.

In 1835, the monasteries were expropriated by the Spanish government and subsequently destroyed, and the land was divided up between local smallholders.

Winemaking continued to fuel the economy over the proceeding years, with vineyards extending over 5000 hectares of land.

The events of 1893 saw the industry hit a sudden stumbling block.  A plague of vine devouring pests known as phylloxera descended on the vineyards and proceeded to destroy everything in their wake.

The infestation had disastrous results for the local economy. Nearby villages suffered the mass exodus of their younger generations, forced to move on to nearby cities in search of work now that employment in the Priorat region had all but evaporated. 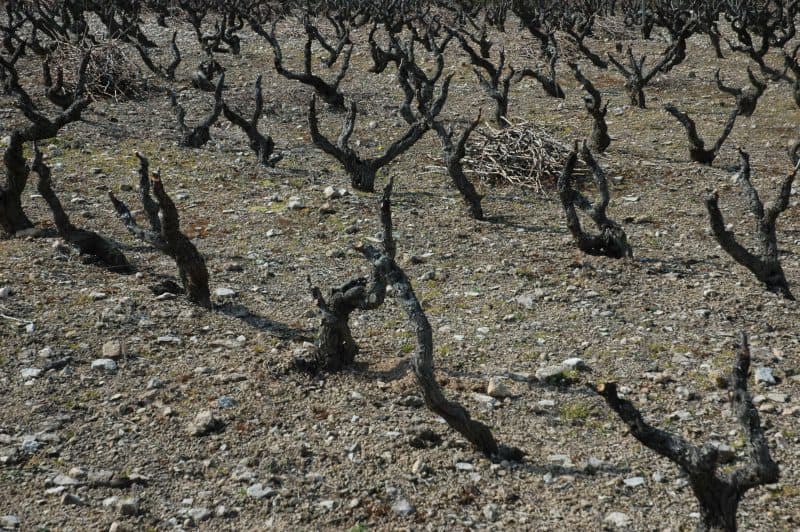 An infestation of pests drastically affected the Priorat vines

The revival of the Priorat region

Despite the agonised attempts of locals to breathe life into the vineyards again, they were eventually abandoned to the elements.  That was until the early 80s, when a group of optimistic young wine enthusiasts, armed with ambition and a beat up camper van, rolled into town.

This band of visionaries was headed up by René Barrier, son of a wine exporter from Tarragona, and Rioja born Alvaro Palacios.

Having previously fallen in love with the region and spied its winemaking potential, the duo had set about recruiting like-minded individuals to join them in their quest, amongst them Swiss-born Daphne Glorian, and school teacher Josep Luis Perez.

Their idea? To cultivate the land and start producing Priorat wine again.

Progress was slow over the following decade: the vines had to be nursed gradually back to health as the novice viticulturists acquainted themselves with the uninviting terrain and ungracious soil.

With money always thin on the ground, many group members were forced to seek additional employment alongside their wine-making project in order to make ends meet. The distinctive mountainside ledges of the Priorat region

Nevertheless, the ambitions of this self-confessed “hippy circle” were lofty: they were going to make wine of the very best quality, and sell it at high prices.

The first bottles of the reinvented Priorat wine were introduced to the market in the early ’90s at a staggering cost price of 1,500 pesetas (an average bottle at the time sold for a mere 100).

Such ambitious pricing was met with outrage within the Spanish marketplace. Rene Barbier recounts having many doors shut in his face by appalled retailers over the upcoming months when they learned of his product’s hefty price tag. Winetasting in the Scala Deli bodega

Although the wine proved a tough sell on home soil, outside Spain it garnered a more receptive audience.  Priorat wine truly took off in the late 90s, when US wine connoisseurs were actively seeking innovative new voices in wine-making.

Having received a tip-off that Priorat was the one to watch, experts in the field sampled the wine and began to endorse it in respected fields.

It was the eventual accreditation of Wine Advocate journalist Robert Parker, who awarded a Priorat wine a perfect mark of 100 in his renowned rating system, that truly made the world sit up and pay attention.

Overnight the phones in the Priorat bodegas started ringing off the hook, inundating the suppliers with orders,  and wine critics and buyers arrived in the region in droves to see what all the fuss was about.

As many as 6,000 bottles of Priorat wine were sold within the space of a single afternoon. Priorat wines began appearing on the menus of some of the most prestigious restaurants in the world.  The dream of the hippy circle had been realised: Priorat was back in business. Today, over 30 years after the pioneers first descended on Priorat,  the industry continues the thrive. Priorat is one of only two wines in Spain to have been awarded DOC status by the Spanish Wine Regulation; the highest possible qualification level for a wine region.

In addition to this, it has also become a popular tourist destination, attracting intrepid wine lovers from across the globe to hear its story and marvel at the stunning surroundings in which it is cultivated.

According to local historian Anna Tigueras, the Priorat region is a unique destination for tourism of this kind: “People come to Priorat looking for an experience linked to wine,” she explains. “This region is not like Tuscany, which, although beautiful, has a very cultivated landscape.”

She goes on to add that Priorat’s rugged and wild terrain is precisely what its visitors appreciate. And what of the wine itself? Predominantly red in colour, Priorat wines are characterised as “big and bold” with “expressive and interesting” flavours.

Most grapes are of the Cariñena and Garnacha variety, although there are scatterings of Cabernet Sauvignon, Merlot and Syrah amongst them.

The wines are high in alcohol content, usually between 14-15.5%, yet the acidity of the soil they are grown in means they are rarely heavy or overbearing and retain rich, fruity flavours with overtones of plum and black cherries.

Owing to the painstaking nature of its manual production, it’s difficult to find a bottle of Priorat on sale for less than 25 euro. At the top end of the market, they have been known to sell for as much as 1,500.

Priorat wine and exquisite food are very happy bedfellows, and those who are unwilling to commit to buying an entire bottle can find a good variety of Priorat wines on the diverse menus of many emerging gastro bars springing up in and around Barcelona. Priorat wines are known for their big, bold flavours

Despite working hard to ensure their wines are in constant evolution, the weight of the Priorat’s viticultural history continues to influence its winemakers.

Recent years have seen many of the Priorat bodegas turning away from more modern technologies in wine-making in favour of the tried and tested methods of old.

These include reverting to storing wine in cement barrels rather than the more modern, French-influenced, oak containers. Innovative winemaking in the Priorat bodegas

Speaking in the documentary of his decision to revisit these classic techniques, Barbier admits: “If there’s one mistake we´ve made over the years, it’s thinking we could do it better than those who came before us.”

However, one thing that binds the current winemakers of Priorat to their forefathers is an unshakable belief in the quality of their product, and a passion to continue producing it: “The Priorat workers of 70 years ago spoke about their wines with stars in their eyes,” Priorat winemaker, Dahne Glorian says.  “And we’ve got them in ours, too.”

If you fancy experiencing the magic of Priorat country for yourself, join TOMA & COE on our new 2019 tour: the Priorat 3 day wine experience.   Visit the best Priorat wineries and sample some of the finest wine Catalonia has to offer.