The beauty of taking the slow train is witnessing the changing landscapes rather than a blur of green, brown and blue. At Toma and Coe we embrace slow travel, and these five amazing train journeys in Spain encapsulate the ethos perfectly. Come with us…

Slow travel is about connecting. Connecting with local people, cultures, food and music. It’s also about sustainability – for the local communities and the environment. The following five train journeys across different areas of Spain are slow travel… on speed! In the 1890’s, The Algeciras (Gibraltar) Railway Company Ltd built a railway between Algeciras, Ronda and Bobadilla where it connected with the existing Cordoba to Málaga line. The engineer behind it was Brit John Morrison, backed by his friend and wealthy financier Sir Alexander Henderson.

The line, now known as Mr Henderson’s Railway, was revitalised in the 21st century. Watching the scenery as you climb from the coast at Algeciras to the mountain-top town of Ronda is akin to watching a nature documentary. Rolling past the windows are fields of sunflowers, pastures grazed by pigs, orange orchards, and the rugged rock of the Serrania de Ronda.

It is little wonder Michael Portillo described it as “one of the most picturesque train journeys in Europe” in the BBC’s Great Continental Railway Journeys. In this series, Manni – a Toma and Coe guide – accompanied Portillo, advising him of the different areas and their history along the route.

This is one of Toma and Coe’s most popular tours, taking in the delicious foodie offerings along the track. Available as a day trip or as part of a longer bespoke tour, you can contact us here for more information. From the Mediterranean coast of Catalonia to the Atlantic shores of Andalucía, the Torre del Oro train wends its way across Spain. It is quite possibly the most pleasurable way to spend 12 hours as, bar a couple of high-speed stretches, the train unhurriedly passes along coastline and through the heart of Spain to Cádiz.

Passing by the windmills of La Mancha, you can imagine Cervantes’ would-be knight errant tilting at those giants. And so it is with the ever-changing scenery, as your mind wanders and stories take hold – as it was for Don Quixote, this journey is “the business of adventures”.

Booked in advance, the tickets for this slow train through everywhere can be had for as little as €30 one way. One of Spain’s luxury train journeys takes you through the south of the country – Andalucía. The Al Andalus train is a tour of 7 days and 6 nights.

Imagine the Orient Express within Spain and you are on the Al Andalus. The train is a luxurious hotel on wheels, with all the elegance of the 1920s. Whilst the style may evoke a bygone era, the facilities are completely modern with full bathroom and WIFI. But it is the panoramic views and the wonderful cities at which the train calls that are the real magic.

Starting in Seville, you explore the city packed with beautiful monuments, architecture and the spiritual home of Flamenco. From there to Jerez, the home of sherry. And so it continues, as the train criss-crosses the southern most region of Spain taking in Cádiz, Ronda, Granada and Córdoba before heading back to Seville.

Enjoy the culture, beauty and passion of Andalucía from the comfort of a first-class train – it’s what dreams are made of. 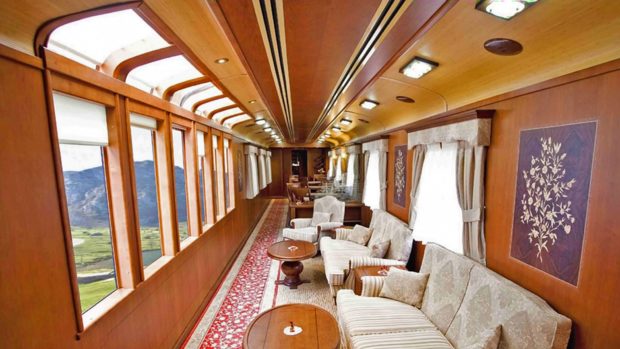 Another journey that harks back to the romance of 1920s train travel is El Transcantábrico Gran Lujo. Historic Pullman cars enhance the feeling of glamour, while the gastronomic delights and wonderful vistas from the lounge cars make this eight day/seven night trip an experience to remember.

Choose from two starting points – San Sebastian or Santiago de Compostela – before traversing the northern coastline of Spain. The route from Galicia to the Bay of Biscay covers Asturias, Cantabria, the Basque Country, Castile and León.

Known as the Green Coast (Costa Verde) there is a rich diversity of landscapes – from rugged coastal mountains to meadows and forests. Add in the culture of Bilbao, Santander, Oviedo, San Sebastian and Santiago and you’re in for a treat of the senses.

This would be the perfect way to relax after walking the Mozárabe/Vía de la Plata route of the Camino de Santiago. Discover our Pilgrim Tours, here. This trip may only last around an hour, but it is a beautiful and memorable experience, nonetheless.

The century-old Soller train departs from the Mallorcan capital city before entering the lush green Tramontana mountain range on its way to the northern town of Soller. The train’s carriages still retain the lacquered wood, sash windows, gilded sconces and leather seats from its inauguration in 1912. Then, travelling between Palma and Soller required following a steep and narrow bridle path. The Mallorcan interior is little known to many tourists, but a trip on the Soller train rectifies that.

Almond, pine and olive trees trundle past the windows, interspersed with ancient estates as the old locomotive heads for the rocky peaks of the Sierra de Tramontana. For those who enjoy engineering marvels, the tunnels and viaducts include the attractive Els Cinc Ponts. There’s no need for old-fashioned transport to end at the destination. Jump aboard the Soller Tram and enjoy a 5km jaunt to the Port of Soller, a natural semi-circular port. The foodies among you will adore the red shrimp.

If you’d like to find out more about our Toma and Coe bespoke tours, day trips and more, feel free to contact us – we’d love to show you ‘the Spain you never knew’.